Legendary perfumer Edmond Roudnitska once said, “A beautiful perfume is one that gives us a shock”.  That was my initial impression when I happened upon the bottle of YS-UZAC’s Sacre du Printemps I found at the November Perfume Lovers London event.

The flacon immediately caught my eye.  It was very dark, almost austere in its simplicity, but quite weighty and felt very cold to the touch.  I felt as if I had come upon an archaic, Hermetic relic.

Nicholas Roerich’s set design for Part One: Adoration of the Earth

Le Sacre du Printemps was inspired the Igor Stravinsky masterpiece of the same name, which translates to The Rite of Spring.  The onset of spring usually calls to mind images of daffodils and little birds twittering around newly budding trees. Stravinsky’s Le Sacre du Printemps, with its ancient Russian setting and ominous allusion to intangible ritual, would prove to be something entirely different, wholly sinister in its execution.  In 1910, when Stravinsky began his work on Le Sacre he recalls, “…there arose a picture of a sacred pagan ritual: the wise elders are seated in a circle and are observing the dance before death of the girl whom they are offering as a sacrifice to the god of Spring in order to gain his benevolence.  This became the subject of The Rite of Spring.” 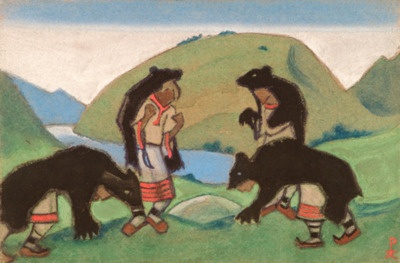 Roerich’s depiction of The Elders

Le Sacre du Printemps which plays out over two acts: Adoration of the Earth and The Exalted Sacrifice, was the third work Stravinsky had composed for Diaghilev’s Ballets Russes.  Diaghilev appointed Vaslav Nijinsky as choreographer, and Nicholas Roerich was selected to design the sets and costumes.  During the rehearsal process for the ballet Nijinsky wrote to Stravinsky, “Now I know what Le Sacre du Printemps will be when everything is as we both want it: new, beautiful, and utterly different – but for the ordinary viewer a jolting and emotional experience.”  It certainly lived up to expectations, causing a huge scandal when it was first staged in Paris at the Théâtre des Champs-Elysées in 1913; however, Le Sacre du Printemps has gone on to be regarded as one of the most influential musical works of the 20th century.

The fragrance opens with a brisk, eye-opening malachite blast like a cool breeze rushing over stone.  Sacre du Printemps feels emerald crisp, saturated with mineral strength.  As the green winds subside, a resinous aspect begins to slither to the forefront of the fragrance.  Vetiver slowly churns beneath the surface, before it erupts, seeping over the olfactory palette of Sacre du Printemps.  The vetiver accord deepens in strength as its makes it triumphant march over the fragrance.  It takes on a palpably earthy aspect, almost three dimensional in its intensity.

Sacre du Printemps then turns quite dry, with a raw, primordial ferocity.  I can feel the power of its dusty roots forcing their way through arid soil with such a momentum a torrid trail is left in their wake.

As Sacre du Printemps continues its development, I can detect something sweet mingling into the terroir of the perfume.  A moisture, a quiet whisper of fertility, that lends the fragrance a maple-esque, woody quality that hums with a hidden heat.

A darkness befalls Sacre du Printemps as it slowly descends into its drydown phase. Silent shadows swirl around its earthy heart, pulling you in close with its smoky incantations.

I feel that it is quite easy to get caught up in Sacre du Printemps’ opening alone.  The perfume opens with such a green gust that I feel if I had sprayed it on my neck, I would feel it rustling through my hair.  It totally grabs my attention on the first spray. However, taking it in as it unfolds is a rapturous ride that beautifully expresses the ancient ideas of air and earth in such a visceral fashion that at times I could feel it in the back of my teeth.  Sacre du Printemps is a perfume that magically translates so very much with really quite little.  A fragrance elegant in its simplicity, yet robust in its interpretation.

Released in 2013 to celebrate the centenary of Stravinsky’s Le Sacre du Printemps.

YS-UZAC’s Sacre du Printemps is available to purchase in London at the Haute Parfumerie in Harrods Salon de Parfums.  Other stockists can be found here.