It might sound a bit sad, but I was super excited to receive this recipe from Deliciously Ella in my inbox the other day.  I had been on the lookout for a recipe to use a surplus of buckwheat groats and cacao powder I had been saving like I was auditioning for an episode of Hoarders.  A recipe that was also a granola??  So making that! 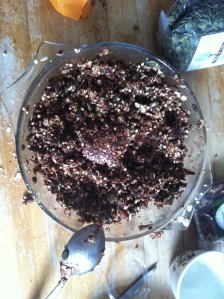 The recipe can be found at: http://deliciouslyella.com/buckwheat-and-ginger-granola/

A few things that I did make note of as I was preparing the granola was that because I used dried dates they seemed to take a big longer to soften, and then I had a hard time blending them (I think because my blender is just shit) so I just ended up mashing them with the back of a fork and stirring everything really well. 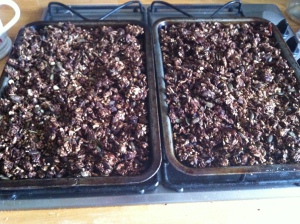 Do be sure to check the granola often once it is in the oven.  I checked mine after 15 minutes of cooking as the recipe suggests and then every seven minutes for the duration of the 45 minute cook time.  I felt that the granola was on the cusp of burning after the third time I checked it so I turned the temperature down to 110°C. 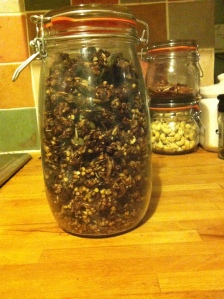 I had some tonight for dessert with plain yogurt and chopped strawberries and it was so good!  The flavor of the granola was rich and nutty and deep.  I’m not sure I would exactly have it for breakfast, but it made an excellent late night snack!